If classes were to be attended again today, rural school No. 762, 80 kilometers from the town of Villa Angela, in Chaco, would not be able to receive its students. The water in the cistern they use is neither safe nor drinkable.. However, it is the only one available in the institution and it is the one that students take in drums to their homes, since they do not have another nearby source.

There are 16 boys, between 5 and 14 years old, and 13 families who depend on that cistern located in the schoolyard where store up to 30,000 liters, when the rain accompanies them. “It hurts me that we cannot provide them with access to safe water and that they have to carry the drums on horseback and they are just two of what it achieves,” says Mabel Rodríguez, director and sole teacher of the school, with a broken voice. The issue has worried her for years, but today unveils it Because it may mean that when the quarantine is lifted, they cannot return to school. The coronavirus pandemic imposes new rules: it may not be enough for Mabel to boil the water and put bleach on it.

Although the return to face-to-face classes in the country is in full planning and the return will be staggered and progressive, where, when and how the school year will begin will depend on the epidemiological situation of Covid-19 in each jurisdiction, as well as also to be able to comply with the general guidelines agreed in the protocol that the Federal Council of Education established on July 2 last. One of the requirements is that the schools have access to safe water, both for personal hygiene and for cleaning and the operation of the restrooms. However, the diverse reality of the country means that not all of them have this requirement.

From the Ministry of Education of the Nation they estimate that “There are 4,500 schools without drinking water nationwide” and that the northern provinces are the most affected, followed by the province of Buenos Aires. The authorities do not have an exact and updated number, since the last national infrastructure census carried out in the 63,390 educational establishments in the country was in 2014. Therefore, from the portfolio in charge of Nicolás Trotta they detail that they have already requested “an updated survey of the 24 jurisdictions about the state of the schools “, and that in each case it will be essential to evaluate the health infrastructure prior to opening. “We assume the strong commitment of not allow the start of face-to-face classes in schools that do not have the minimum and necessary hygiene conditions, as established by the protocols developed in the framework of the pandemic for the return to classrooms, when the epidemiological situation allows it, “they assure LA NACION.

For Nicolás Wertheimer, doctor and founder of the social company Agua Segura, that a boy does not have access to this right “is very serious from the health-medical side” since “water is a key factor and in the very smallest it represents a very high percentage of their weight. “In addition, Wertheimer points out that in many places” the school is a community center and perhaps the only place where the child eats. “Therefore, he warns that” if the water source is not safe, either because the distribution service is untreated or because the tanks are not washed or they are not aware of using any treatment such as boiling the water, the consequences impact on the neurological development and cognitive future of the child when I grow up”.

In Argentina there are 63,390 establishments of all educational levels and teaching modalities, without considering those of the university system, according to the official register of the National Ministry of Education. Of these, about 4,500 do not have safe water.

From SedCero, an initiative that articulates various social actors to guarantee access to safe water in Argentina, Bolivia and Paraguay, highlight that in emergency situations where immediate measures are neededAlternatives such as providing filters, purifying sachets, or supplying the largest municipalities, which have water purification plants, with tank trucks to provide the service in rural communities, may be feasible solutions.

In this sense, from the Ministry of Education explain that they are making an investment of 2,300 million pesos: 500 million in direct transfers of up to 50,000 to the schools that each province prioritizes, in order to acquire supplies for the return to face-to-face; 1,300 million for works on water supply, sanitary repairs and hygiene and safety conditioning; and another 500 million to reinforce the School Infrastructure Program 37, intended for minor repairs.

Not suitable for drinking

Mabel is concerned. Although they have water thanks to the gutter system that supplies the cistern, not only is it not suitable for drinking, but it is little. They only use it to wash and throw in the two wellbaths that the institution has more than 50 years. “The rainwater is quite clean, which happens that all the dirt goes to the bottom, there are no grids and the water falls with bugs, with frogs, toads. The boys know they can’t take it straight from there“says the director.

From the Safe Water Project, which designs and implements initiatives to solve access to safe water in urban, peri-urban and rural areas, they point out that the main problem it causes the lack of this resource in schools is “absenteeism due to illnesses related to consuming bad water, such as diarrhea, second cause of death in children under 5 years of age in Latin America and, as a consequence, dropping out of school “.

For what be suitable for consumption and avoid disease, Mabel and the group of parents that cooperates in the school organized to control the consumption of water and do a home treatment. “We boiled it and put a little bleach says the director. But there is little, so she takes great care. There are schedules and quantity of liters to take it out. On weekends when I’m not there, a neighbor stays and she puts the key and padlock, because some rogues hit me at the gate of the school and they entered with trucks to get water. “

“We talk about safe water because we do not technically treat water. Although the jargon is drinkable for human consumption, it is not drinkable in the sense that we did not do any treatment other than clean it. In short, both types are suitable for consumption “they explain from the Safe Water Project.

Within the national statistics, Chaco is the third of the most affected districts of Argentina by Covid-19. Mabel says that, before the quarantine, her students, who are mostly children of peons who migrate according to the harvests, made up to 30 kilometers on horseback to study on old wooden benches and have breakfast or lunch, depending on the merchandise that reaches them.

Tired of complaining to the authorities on duty for the general infrastructure problems of the school, the director says that she has a personal goal before retiring: that the children can have safe water at least in the institution, since in their homes they do not have. A situation that is repeated in many rural or peripheral schools.

“I got the Internet, we have the computers, we only need the antenna. This year I’m going for the water. It would be a great step if my boys can drink clean water. I would like there to be equity and opportunities for them, “says Mabel.

Since 2015, the Safe Water Project has made a qualitative survey and it has registered 1180 schools in the country that do not have a secure supply or access to this resource, which negatively impacts 118,811 students. Although the list is headed by the province of Buenos Aires, 56.73% of the surveyed schools belong to Catamarca, Corrientes, Chaco, Formosa, Jujuy, Misiones, Tucumán, Salta and Santiago del Estero. In other words, the north of the country concentrates the most affected area.

In this sense, from the General Directorate of Culture and Education of the province of Buenos Aires they point out that regional meetings with the different actors of the educational system are in full swing “to adapt the framework protocol voted by the Federal Council to institutional realities and district of the province, which are very diverse. ” They explain that they are doing a “school-by-school survey to determine the ones that have the assured water supply and thus detect those that need some type of intervention” in order to guarantee what the protocol asks for: “water for hygiene and cleaning of the building for back to school”.

There are nine provinces that are making progress in planning for the return to classrooms (Catamarca, Formosa, San Luis, Tucumán, Corrientes, Misiones, San Juan, Santiago del Estero and Santa Fe), but from the Education portfolio, they explain that when, how and in which schools and sections classes will begin “will be a provincial decision that the Nation will accompany with a budget for the maintenance and repair of school infrastructure and the purchase of hygiene and safety supplies”.

Although this difference between safe water for hygiene and cleaning, and drinking water is highlighted, the Safe Water Project considered it a technicality. “Drinking water is all the water that is treated, which has certain minerals, nutrients. It is a differentiation that the National Food Code sets. Safe water is any water that has nothing microbiological, toxic, or physical, but has not undergone any type of treatmentUltimately, they explain, “both types are fit for consumption.”

“There are social technologies that can really solve the problem. Something that gave us a good impact in the Chaco area – and it is not expensive – is the construction of tanks to collect rainwater. In an area where it rains only two months a year, if you have a good collection system, you can really cover the annual amount of water necessary for the school to function.“, details Nicolás Avellaneda, coordinator of the SedCero project in Argentina, who emphasizes that access to water” is a human right that must be guaranteed by the State. “In this sense, he points out that” currently the power is held by each province “by That is working on a national law for consumption and sanitation.

“It is important to add training to teachers in the care and use of water because we need to have good management so that it remains safe,” says Avellaneda and clarifies: “They are palliative measures that do not solve the problem but clearly the children need to return to class”. 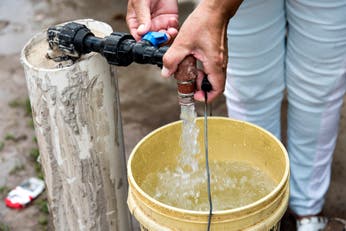