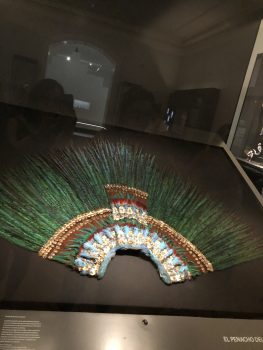 The Welt Museum Wien or the Museum of Ethnology in Vienna holds one of the most precious items left from the Aztec empire: Emperor Moctezuma’s headdress. This beautiful headdress or penacho is an iconic artefact of the museum and a go-to point for most Mexicans in Vienna.

The Aztecs and Moctezuma

Moctezuma II ruled Tenochtitlán and the Aztec empire from 1502 to 1520. During his lifetime, the Aztec empire reached its most grand size with many smaller groups and territories as far south as Chiapas (southern tip of Mexico) forcefully incorporated into the empire. Los lideres or the rulers of the different cities were free to do as they pleased so long as they paid a semi-annual alliance to the capital. In return, these territories received protection as well as the use of economic resources and deals of Tenochtitlán.

In 1517, the Spanish arrived on the coasts of the Aztec Empire and, in 1519, when Hernán Cortéz arrived, Moctezuma sent emissaries. Shortly after, Moctezuma and Cortés met and here is where the story gets tricky. According to Cortés’s writings, Moctezuma quickly gave up his trono or throne as emperor while other records indicate that there were plenty of language issues that limited the conversation between the two. Regardless of how easy the transition was, we do know that the Spanish conquistardores eventually massacred the Aztecs thus ending the empire in 1521.

Moctezuma was an emperor or emperador similar to the emperors we know of other parts of the world: he was poderoso or powerful and he was rich. Just like other emperors from the world would parade in lavish clothes and jewellery, Moctezuma had different penachos or headdresses for different occasions. These penachos were made with feathers from beautiful birds and there was a different penacho for different activities.

Unfortunately, there is only one penacho dating back to the Aztec Empire left, and, unfortunately for Mexicans, this penacho is in Vienna and not in Mexico. The Museum of Ethnology in Vienna holds this priceless piece of history in its permanent collection. There is no clear story as to how this beautiful headdress made it’s way to Austria, but it must have been sent at some point by Cortés and some of his people to Spain together with other artefacts. For many years, there were doubts as to what this object was, but in 1908, it was finally agreed upon that the research pointed that this was a headdress or penacho thus increasing its value and importance.

For many years, Mexico tried to get the penacho back to its place of origin. Austria, however, did not agree. Eventually, a joint team of Mexican and Austrian researchers were able to work together restoring the headdress to its current glory. After this research, however, it was determined that the feathers were in such a delicate state that a trip to Mexico would compromise its integrity. You can read more about the penacho in this article from National Geographic España.

But not all is lost! At the Museo de Antropología in Mexico City, you can see a beautiful replica of the original headdress. The Museum of Ethnology in Vienna also offers free entrance to Mexicans (with a valid ID) to see this beautiful piece of our history. While these two options are not ideal in regards to cultural ownership, it is the only way to preserve this beautiful headdress that is full of mystery and beauty.

If you want to find out more about the Penacho de Moctezuma, you can see the documentary below.

Have you seen the Penacho de Moctezuma in Vienna? Where do you think it should be displayed, in Mexico or Vienna?