¿Cuál es tu comida favorita de América Latina? (What’s your favorite food from Latin America?). Is it tacos al pastor from México? Or maybe it’s fresh ceviche from Peru. Then again, it could be the massive bandeja paisa plate that’s famous in Colombia. ¡Hay tantas opciones deliciosas! (There are so many delicious options!). I hope you’re not too hungry because we’re going on un viaje culinario (a culinary journey) in today’s post. 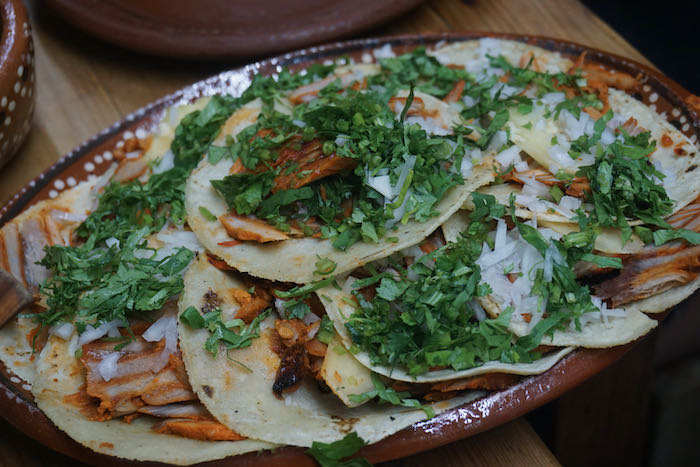 I don’t know about you, but I absolutely love tacos. I love them so much, in fact, that I wrote a post called “Me Encantan Los Tacos.” Check it out to learn all about the almighty taco and build your Spanish vocabulary. You’ll be ordering tacos from a street cart like a pro after studying that post!

There’s a whole lot more on the menu other than tacos in Mexico, though. The cuisine differs depending on the region. You can enjoy super fresh mariscos (seafood) in places like Puerto Vallarta, the famous mole de pollo (chicken mole) in Oaxaca, and the delectable cabrito (roast goat) up in Monterrey.

For a detailed look at Mexican food with tons of vocabulary, click here. You can also see some authentic taco trucks and several other famous Mexican dishes in this video:

¿Alguna vez has probado el ceviche peruano? (Have you ever tried Peruvian ceviche?). Nobody does this dish quite like Peru. If you’re not familiar with it, ceviche consists of corvina (sea bass) that’s “cooked” in a mixture of jugo de limón, cebolla, sal, y ajíes picantes (lime juice, onion, salt, and aji peppers).

Peruvian ceviche typically has some crispy corn kernels and chunks of sweet potato as well. It’s commonly served with a small glass of leche de tigre (tiger’s milk), which is just the leftover juice from the ceviche. Pro tip – it’s great for curing a bad cruda (hangover). 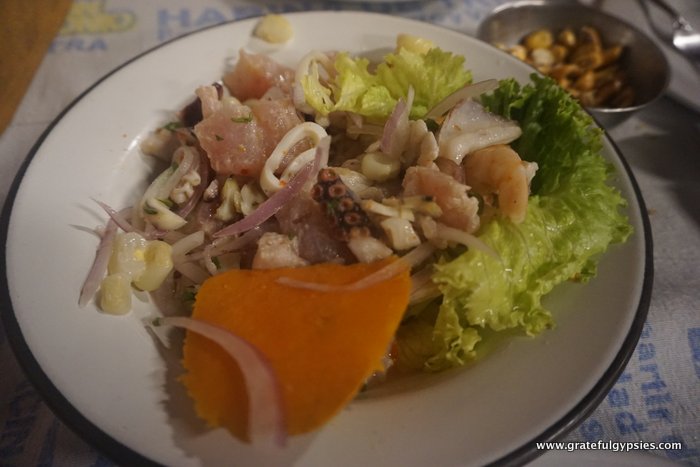 Ceviche in Peru is amazing!

While ceviche may be the start of the show, there’s a whole lot more going on in the culinary realm in Peru. Other famous dishes include ají de gallina (chicken in yellow pepper sauce), lomo saltado (beef with onions, tomatoes, and fries), and causa, which is kind of like a mashed potato lasagna. Trust me, it’s delicious! For a deep dive into Peruvian food, click here.

Some of the most iconic Colombian dishes include empanadas and arepas de choclo. I would typically buy one or the other every day when we lived in Medellín. Speaking of la Ciudad de la Eterna Primavera (the City of Eternal Spring), the go-to dish here is the aforementioned bandeja paisa. 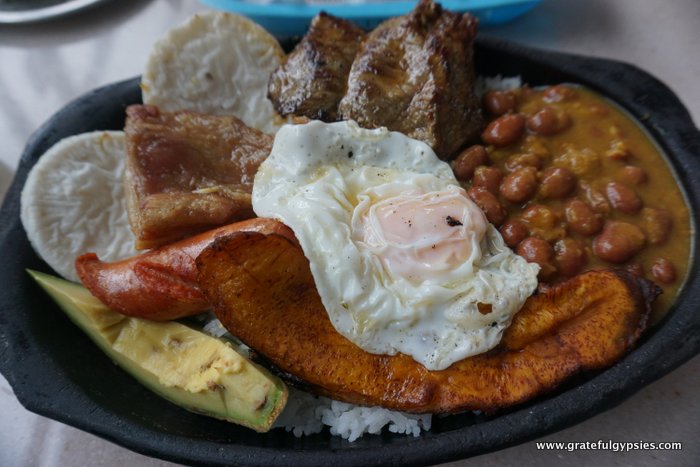 I call it the “heart attack plate,” as it has beef, chicharrón (fried pork rinds), chorizo, beans, plantains, a fried egg, arepas, avocado, and rice. You certainly won’t need to order anything else if you get this. In fact, you may need some help!

Colombian food often gets overlooked, but there are plenty of tasty things being cooked up all over this diverse country. For a closer look at common ingredients and dishes found in Colombia, click here.

Our culinary journey continues to Colombia’s neighbor to the west – Ecuador. It may be a small country, but it still packs a punch when it comes to the cuisine. What’s on your plate here largely depends on what area of the country you’re in. There are four distinct regions in Ecuador – la costa , la sierra , la Amazonía y las Islas Galápagos (the coast, the mountains, the Amazon and the Galapagos Islands). 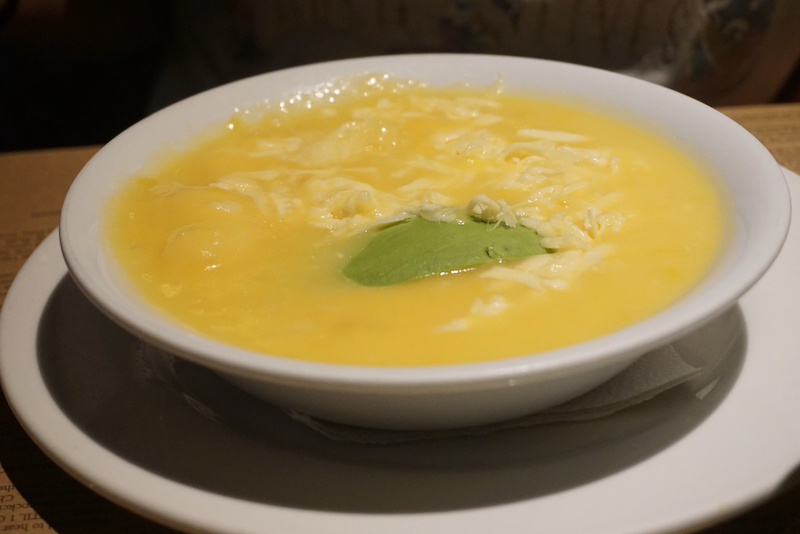 One of the most typical dishes you’ll find in Ecuador is locro de papa. This hearty soup usually has a base with papas y queso (potatoes and cheese). Me gusta comer esta sopa con pollo y aguacate (I like to eat this soup with chicken and avocado).

To learn more about the cuisine of Ecuador, check out this blog post. You’ll get introduced to several common dishes there, including cuy (guinea pig). Yes, I’m talking about the furry rodent you may have had as a pet. They’re on the menu in Ecuador…

Last but not least, we travel all the way south to Chile. The cuisine of Chile is a mix of indigenous traditions as well as those brought by the Spanish. That’s not all, though – there are also French, German, Italian, and even some Middle Eastern influences. The result is known as cocina criolla chilena (Chilean Creole cuisine).

Las empanadas son muy populares en Chile (Empanadas are very popular in Chile). They’re typically baked rather than fried like the Colombian version. That makes them healthier and in my opinion, more delicious. 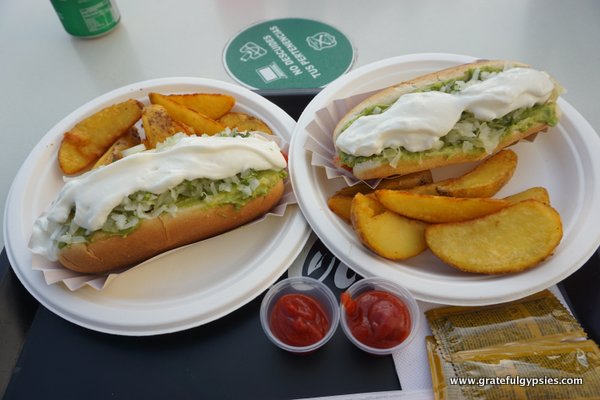 Another must-try dish in Chile is la cazuela, which is a stew that’s typically cooked with chicken or turkey and a bunch of vegetables. We can’t mention Chilean food without el completo – a hot dog covered in mayo and smashed avocado. Move over New York City, because these hot dogs are the real deal!

Click here to learn more about these and other Chilean classics. You can also take a tour of Santiago and learn some Spanish at the same time in this short video:

My apologies if this post left your stomach rumbling. Hopefully, there’s some good Mexican or Peruvian food near where you live so you can satisfy your craving. Whatever you decide to eat, I’ll leave you with this – ¡Buen provecho! (Bon appétit!). 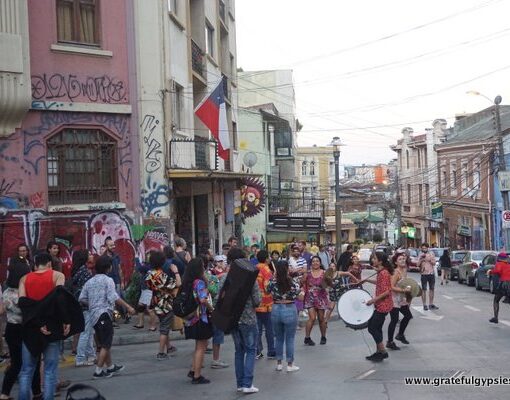 In this lesson of our English Spanish Parallel Texts course and we are going to practice more with comparing in Spanish, but […]