With little or no Internet connection; without a computer or cell phone or having to share the same device between several siblings; overwhelmed by responsibilities inside their homes; juggling to comply with the instructions that their teachers send them when they also have to work. To that we must add

loss of consciousness, stress, hunger. A combo of violations that forms just a snapshot of the reality of thousands of girls and boys in Argentina for whom

Studying in times of pandemic became an odyssey.

In this context and as specialists warn, today

the continuity of the secondary is more in check than ever

. LA NACION spoke with young people from different parts of the country to find out what are the greatest challenges they face to continue with their school careers and what tools or resources sustain them.

A report recently prepared by Fundación Voz based on consultations with different actors related to education, puts on the table that the potential abandonment of thousands of young people is the great shared concern. The research, titled “Back to schools: how will we continue after quarantine?” Indicates that the statistics of the respondents vary

, depending on “the social, geographic, technological contexts, among others”. He stresses that the students who register today as “absent or disconnected” must be added those who, at the end of the isolation and even having continued with their virtual classes, “are forced to leave because they have to help families to economic recovery post quarantine. ”

“The pandemic generated totally different educational conditions from those we used to go through. The students have lived through them in a very traumatic way. When the fear of death is at stake so closely, everything becomes more complex”, reflects Alberto Croce, director of Fundación Voz. In this sense, it considers essential that they be developed

for the educational trajectories of each student, generating what he calls “new regularities” that “make possible educational transition processes for those girls, boys and young people with whom we have lost contact and who,

in the most conservative calculations, they are above 400,000

, but that will be many more over the months. ”

Because of the pandemic,

they stopped attending classes (70% in public schools). This is indicated by the study “Covid-19 in Argentina: socioeconomic and environmental impact” of the United Nations. One of the central problems is the absence or poor connectivity to the Internet, which makes contact with their teachers enormously difficult. 18% of adolescents between 13 and 17 years old

does not have internet at home

does not have electronic devices

to carry out school tasks, a value that climbs to 44% among those who attend state schools.

For Celeste and Dulce Rodríguez, two sisters, 18 and 19 years old, are not just percentages: it is their everyday reality. They live in Loma Hermosa, José León Suárez, and when their father passed away, some years ago, they left school to help their mother with the youngest of the family (in total, they are 13 siblings). Currently, they are in the second to last year of high school at the María Asunción Guglielmi School Workshop (Temag), of the Fe y Alegría movement, in San Martín. “With the quarantine the connection issue was very complicated for us, because we are not working and paying the Internet is an expense. Until a week ago we lived with our mother and the neighbor had given us the password for her wifi,” they say .

To connect, they went up to the terrace with two chairs and a blanket to protect themselves from the cold.

If it rained, it was impossible. “Now we live on top of my sister’s house and we don’t have Wi-Fi,” they add.

They consider that the unconditional support of their teachers is essential. “The director of the school knew everything we were experiencing and because of the effort we were making he gave us a computer,” they explain. At school they feel “comfortable”, sharing the classroom with boys and girls their age, who for various reasons also fell behind in their schooling. “The teachers make you feel at home, they always ask us what is wrong, if we need anything.

No one in our family finished high school.

We would like to study to be a police, medicine or psychology “, say the sisters.

Juan Palma is a teacher in a secondary school of José Mármol, Almirante Brown, and tutor of Cimientos. “There are several students who find complications to maintain the regularity that the school presents, in the sense of meeting schedules. In vulnerable contexts this multiplies,” he says. Difficulties in understanding and solving slogans

without the “face-to-face” accompaniment of their teachers

, is another of the problems. “It may take days between the consultation and the teacher’s response. The students leave the homework there and it is a subject that remains unclear,” says Palma. In this sense, the sustained and personalized support of the tutors is a key support.

areas away from urban centers

, the challenges multiply. Elena Oscar is the principal of the Niogasta Secondary School, a rural town in Tucumán. “We have students who work in the harvest. For many, it is difficult to have the money to cover the expenses of WhatsApp, since here there is no Internet and connectivity is by cell phones. In addition, others have very old devices. They are the that we are more dedicated to accompany them. Teachers are available seven days a week, at all times, available, “he says.

Several students from the Niogasta school are awarded a scholarship by Minkai. “Teachers comment with great concern that many young people

by not going to class they started working

, abandoning school tasks and responsibilities and stating that they will not return to school when this situation ends, “says Patricia Juan Ramón, executive director of the organization. She adds that they are communities where access to education and sustaining it is always a challenge, for the poverty situation in which families live, because in the case of the young people who are in secondary school, their responsible adults barely finished primary school, among other reasons.

For Magdalena Fernández Lemos, executive director Enseñá x Argentina, since before the pandemic

the face-to-face school “was no longer working for everyone and now much less.”

The multiple challenges young people face make it difficult not only for them to connect virtually, but also mentally. “Being able to carry out school activities requires energy that many times they do not have because they have it in many places. In contexts where there are unmet basic needs, where there is hunger, that they can focus on studying, it is not an. option, “she warns.

On the other hand, it stresses that for those boys and girls

learning is “much more autonomous”,

since they do not have the possibility of being accompanied by their responsible adults who, in many cases, did not finish school. “Also, if before many did not make sense of what they were studying and that was something that had to be worked on, now that is even more difficult,” says Fernández Lemos. And he adds: “We work with re-entry schools for boys and girls who have dropped out. The challenge of desertion is something that we have on the surface: how we make it a school that makes sense to them. Our focus is to accompany these processes, not push them. Sometimes there is like a mandate that we have to push the kids from school, but

it seems to me that the verb is to accompany

The executive director of Enseñá x Argentina stresses that school failures are not for boys and girls, but for the system that excludes them from the possibility of sustaining their careers. ”

There is a reproduction of inequality.

What we see at school is a bit of something much bigger, “he says.

Croce believes that ties, both with the school and with other young people, became a central and priority issue. “Now, the great challenge is to strengthen or recreate them in case they were lost. I think it will be necessary to face

. With great participation from all sectors and social actors. We cannot lose thousands of young people and suffer a ruthless ‘educational pandemic’, “he concludes. 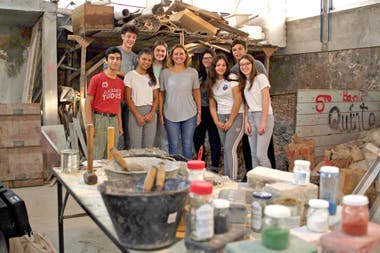 The figures of the high school dropout They were already an urgent problem before the pandemic broke out, but the Covid-19 threatens […]