ROMA.- In what she herself defined a “Goodbye visit”, the outgoing German Chancellor, Angela Merkel, said goodbye to Pope Francis today and the Italian Prime Minister and former President of the European Central Bank (ECB), Mario Draghi, whom many hope has passed the post as a strong figure in Europe.

On her last official visit to the Eternal City, Merkel, a passionate about Italy not only for her holidays in the Dolomites or on the Ischia Sea, but also for Brunello di Montalcino -a red that she prefers to that of the French, who tried convert it-, had an intense day.

Kristalina Georgieva, on the tightrope: the US Treasury asked to “defend the integrity” of the IMF

Born in East Germany, the daughter of a Protestant pastor and always in tune with the pope of the end of the world who as a young man studied for his doctoral thesis in Germany and who never hid his admiration for her, especially when in 2015 he opened the gates of the country to 1 million Syrian refugees, the most powerful woman in the world had a private meeting with Francis in the middle of the morning at the Apostolic Palace. A true reflection of the “good vibes” that always existed between them, the meeting lasted 45 minutes. The chancellor then also met her number two, Cardinal Pietro Parolin, and the Vatican’s foreign minister, the British archbishop, Paul Gallagher.

“It has been a great honor and a joy to meet in a private audience with Pope Francis, with whom we discussed the problems of the Church, but also political challenges, such as those of the EU, after the Pope recently visited Europe. guidesl, ”Merkel told the press, referring to the Pontiff’s visit last month to Hungary and Slovakia. The Christian-Democratic policy was received seven times by Francis, the last in June 2017 – all a record – and it is believed that he had a much better relationship with him than with his compatriot, Benedict XVI, pope emeritus.

They also discussed the upcoming climate conference to be held in Glasgow, Merkel said, highlighting the role of the Pope. “Their commitment is not soft, but important: humanity’s response to climate change requires a radical change in our way of life,” said the Chancellor, who in the morning addressed the horror of abuses in the Church when visiting the Center for the Protection of Minors that was started by the German Jesuit priest, Hans Zollner, an expert on the subject.

Angela Merkel and her husband, Joachim Sauer, during the papal audience (HANDOUT /)

A statement from the Vatican about the meeting, as always concise, stressed that “when talking about issues of mutual interest in the international and regional spheres, there was agreement on the opportunity to relaunch cooperation to face the multiple crises in progress, with particular reference to the consequences of the health emergency and migration ”. A phrase with which, between the lines, it could be read that, also for the Vatican, Merkel’s departure will cause a void that is difficult to fill in a more than complex international geopolitical scenario.

In this sense, many are excited here that DraghiMerkel’s old acquaintance and another great figure in the international arena, become her successor as strong leader of the European Union (EU), a role to which French President Emmanuel Macron also aspires. 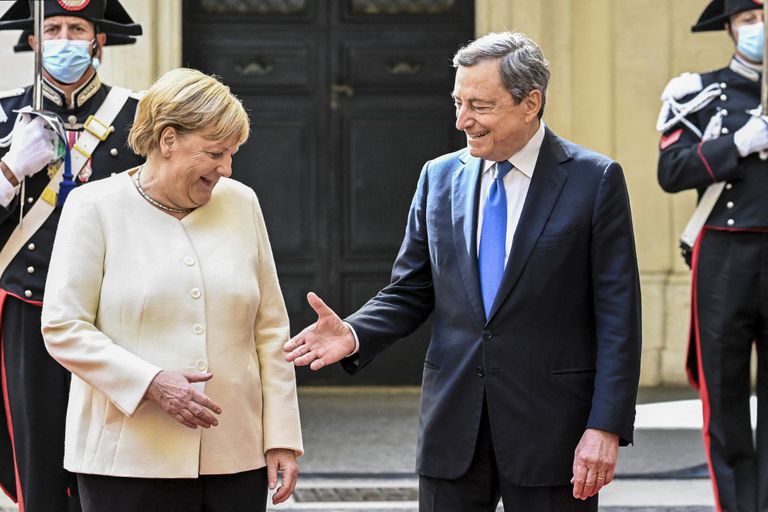 Draghi not only received her with all the honors for the last official visit to Palazzo Chigi, but, in a reflection of a long-standing relationship, he later had lunch with her on the beautiful terrace of the Eden Hotel (where former President Cristina Kirchner used to stay). ), with a spectacular view over the eternal city and gourmet menu by chef Fabio Cervio.

When Draghi, nicknamed “super Mario”, presided over the ECB, he used to visit Merkel regularly on hyper-armored visits and her tuning at crucial moments of the euro crisis has more than once saved Europe from collapse. In fact, in Berlin confidence in Draghi is absolute, although, as usual, the big question is how long this trustworthy prime minister will last in command of Italy and, above all, who will come after him.

Now at the head of a unity government to which he gave an efficiency and determination that earned him great popularity, Draghi, 74, in a speech thanked the chancellor “for the decisive role she had in shaping the future of Europe in the last 16 years.”

“From 2005 to today, Europe has faced a great recession, the euro crisis, the Covid-19 pandemic. The chancellor has known how to guide Germany and the EU with calm, determination and sincere Europeanism, “he said. “During the years that I was in charge of the ECB, Merkel upheld the independence of the central bank with great conviction, even when we were attacked by the expansionary policies necessary to defend the integrity of the single currency, to ward off the risks of deflation and to sustain the recovery. ”, He stressed. “I am personally grateful to him for the exchanges we had in those difficult years,” he recalled.

Draghi also recalled how during the pandemic, thanks to Merkel, German hospitals received dozens of Italian patients. And its key role in the creation of the Next Generation EU program, the bloc’s extraordinary fund for the countries hardest hit by the pandemic, “an extraordinary opportunity to relaunch Italy’s economic growth in a robust, equitable and sustainable way.”

The flowers did not end there. Draghi defined Merkel as a “champion of multilateralism when other countries aligned themselves with protectionism and isolationism” and stressed that “she had the courage to defend the values ​​of democracies” during the crises in Syria and Ukraine. “It has transformed the role of Germany in Europe”, he also said, closing admitting that “we are going to miss it, although I am sure that we will have a way to see it other times in Italy, perhaps on more relaxing occasions, seeing the love for our country”.

The Pope and Merkel met again in the afternoon at an event for peace organized by the Community of Sant’Egidio in a perfect setting for the “official” farewell to Rome: the Colosseum. Then, together with representatives of other faiths, they prayed for the brotherhood of peoples, the end of wars and the pandemic and for better care of the Earth.